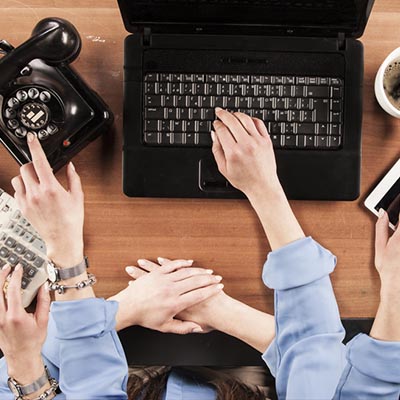 It seems that businesses today are obsessed with productivity, and while this isn’t a bad thing inherently, it can encourage you and your employees to pick up bad habits. Unfortunately, those who try to juggle responsibilities are often less productive than people that focus on one task and take it through to completion. Let’s discuss why this is, and how you can better, more productively make use of your time.

As it turns out, trying to do more than one thing at once doesn’t work. The concept of practically multitasking to boost your productivity is 100% bonafide, grade-A nonsense. It isn’t that men or women are better at it, it isn’t that younger people have developed the skill in their ultra-connected world… it’s that the whole idea is a falsity.

At least, in the way that most people view it.

Let’s try a brief experiment. Try drumming your fingers on your desk as you read this blog.

Now, back to how multitasking is utter nonsense.

The issue really boils down to the fact that we define multitasking as the act of doing more than one thing at once. This is something that has been proven to be impossible for the human brain to do. When we think we are “multitasking,” all we’re really doing is mentally switching from one task to another. That’s just how we’re put together, we’re meant to focus on one thing at a time.

We are so often presented with what appears to be examples of practical multitasking, this makes us believe that two separate tasks can be accomplished at one time. It is only natural to resist dismissing the concept entirely. After all, how else do you explain all the people we see all the time singing and dancing, typing on the computer while participating in a separate conversation, or even walking and chewing gum at the same time?

Pride Gets You High

Each time the brain addresses the many mini-tasks that we perceive as multitasking, it rewards itself with a quick hit of dopamine. Dopamine, which is a neurotransmitter, can effectively be described as the brain’s reward to itself. Dopamine can be released no matter how small the perceived accomplishment is. As a result, whether it’s checking email or locking down lunch plans, each tasks we complete releases a little bit of dopamine.

The thing is, our brains really like this dopamine, and so we are then motivated to do what will release more of it.

This is where the compulsion to check social media and email can come from. If we can fool ourselves into thinking we’re doing a lot (even if we aren’t accomplishing anything) we can encourage our brains into releasing more dopamine.

Three Reasons to Resist the Temptation

Of course, mental addiction aside, can multitasking have any other negative qualities or side effects?

Of course it can!

Actually, it decreases it, and technically makes your tasks take longer than they ordinarily would.

If we were to multitask, shifting from Task A every 15 minutes and from Task B every 30, it wouldn’t actually affect the total amount of time it takes to complete our workload. Both tasks would still take a combined 2 hours and 15 minutes to complete. What’s worse, that by switching back-and-forth between these tasks you make each segment of supposed productivity take that much longer.

If we continue to assume the 15:30 minute intervals, the 45-minute mark that should have seen the completion of Task A would only see each task being one-third done. In fact, Task A wouldn’t be completed until an hour longer had gone by.

Trying to multitask inherently makes us feel tired and frazzled, primarily because switching our mental processes the way that multitasking demands ultimately stimulates the production of cortisol in the brain. Also known as the stress hormone, cortisol lingers in the body for much longer than other hormones do. So, there’s a reason that we feel stressed as we multitask: we’re introducing more of a stress-causing hormone to our brain by doing it…. And, of course, it still gets worse.

Multitasking can have a detrimental effect on the brain itself.

Studies have established that multitasking can actually be related to various mental health and cognitive capabilities, if it doesn’t directly contribute to them. One such study showed that multitasking led to severe cognitive drops in adult subjects, bringing their IQ scores to that of an eight-year-old. The same effect can be brought about by a sleepless night.

Worse, further studies have associated the tendency to multitask to a less dense anterior cingulate cortex. This is the area in the brain responsible for human empathy and control over cognitive capabilities and emotions. While it still isn’t sure which of these traits is the cause and which is the effect, it doesn’t cast multitasking in a great light either way.

Multitasking can also affect a person’s emotional intelligence as well. Without a sufficient EQ, an individual could face some challenges in the modern workplace, as EQ covers self-awareness and the ability to maintain social relationships. Most noteworthy, an emotional intelligence training firm known as TalentSmart tested the EQ levels of more than one million people, concluding that more than 90% of industry performers demonstrated high EQ levels.

Summing it up, multitasking could potentially have a negative effect on one’s work, affecting stamina, memory, workplace relationships, and general cognition.

Are you still drumming your fingers, and (without peeking) what were two of the three examples that we offered as “proof” of multitasking’s legitimacy? If you aren’t drumming, you just proved that you can’t actually multitask, and if you can’t remember the examples we used, we may have just proved that multitasking isn’t a practical means of working on a task.

Returning to two of our examples, the secret behind singing and dancing simultaneously or walking and chewing gum at the same time, is the same as the secret behind anything else in the world: practice — or, more accurately, practicing doing these two activities in a unified way.

Technically speaking, this means that these activities no longer qualify as multitasking, as they are each combined into a single action. Someone isn’t singing while they are dancing, they are singing, as well as dancing, as one, solitary skill. The same could be said of someone who can walk as they are chewing gum… two disparate activities have become one action, through extended practice.

How to Stop Trying to Multitask

Seeing as we’ve pretty clearly framed multitasking as a negative thing, it is pretty clear that it is the kind of habit you’ll want to break. As with most bad habits, one of the better ways to get rid of it is to replace it with a good habit. We’ve assembled a few suggested habits to help you avoid your multitasking tendencies:

We’ve all been in that position: we’re working on a project, and we’re currently stuck waiting on a response from a coworker. While this may sound counter-intuitive at first, try to ignore the temptation to abandon your efforts for another task with the intention of revisiting the first task later on. Don’t forget the lesson we learned above…switching between tasks means that neither is completed quite as quickly.

However, you shouldn’t see this as an excuse to sit around and wait all day for a response, either. Try looking at it as an opportunity to evaluate how your project is coming along, to establish an estimated timeline for the remainder of your work. If you do elect to switch tasks, make sure that you switch back promptly once your original task can continue.

Communicate When You Are Unavailable

Chances are, the majority of distractions you’ll have to deal with in the workplace are going to come from internal sources, be it from conversations between coworkers or incoming business communications. For the sake of your productivity, you will have to do your best to either ignore or, if possible, discourage these distractions. Make sure that you signal to your team that you shouldn’t be disturbed with a quick announcement of your unavailability and/or the application of headphones (music/white noise optional).

As far as you are able, you need to put a stop to the other distractions that can influence your workday. Take email, for example. While it can be a great communicative tool, it can also lead to distractions. If you can, silence your notifications, and schedule out times to check it. If your attention to something is urgently needed, you will be notified.

Your mobile device is often the same way. Each time we glance at it, our concentration is diminished. With the exception of when an urgent call is expected, try to power it down and put it away. Without its interruptions, you’d be surprised how much can be achieved.

Want to know why the to-do list has been used for so long? It’s simple and it works. Mapping out your day’s goals by their priority enables more to be accomplished, and allows you to plan out the breaks that you’ll likely need. This mindfulness will also help your ability to fully focus on the task at hand. This practice, in contrast to multitasking, is known as monotasking.

Rather than splitting your time and attention between two goals, monotasking is the full dedication to one goal at a time. We examined these differences above with our 45-minute and 90-minute tasks. Just as we showed in our example, monotasking enables goals to be accomplished more efficiently.